A bold public statement was released Ffriday, March 11th by the Global Commission on Drug Policy stating that “an historic opportunity to achieve more humane and effective drug policy is at risk.”  The Commission is referring to the 2016 United Nations General Assembly Special Session (UNGASS) on drugs — a meeting of all UN member states 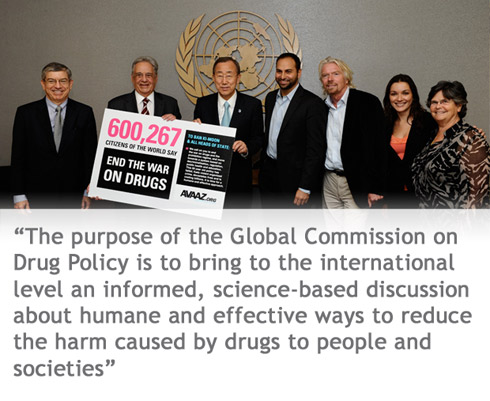 to evaluate the current state of international drug control. The UNGASS is taking place in New York from April 19-21 and is the first such meeting in 18 years.

“We are driven by a sense of urgency,” said Fernando Henrique Cardoso, Former President of Brazil and Chair of the Global Commission.  “There is widespread acknowledgment that the current system is not working, but also recognition that change is both necessary and achievable. We are convinced that the 2016 UNGASS is an historic opportunity to discuss the shortcomings of the drug control regime and identify workable alternatives.”

The Global Commission today called the proposed outcome document for UNGASS (currently being negotiated in Vienna) “long on rhetoric, but short on substance” with “no hard solutions.” The Commission also urges governments to put “people’s health, safety and human rights first.”  According to the statement, this includes:

The Commission believes that global drug prohibition has not only failed to achieve its originally stated objectives of eradicating drug production and consumption, it has also generated alarming social and health problems. The UN itself has identified some of the impacts of hardline approaches to drug prohibition including: the creation of an illegal, criminal market worth at least $US 320 billion per year; dangerous “balloon effects” during which production or traffic is interrupted, only to be increased in a different territory or route; and a lack of access to controlled medicines for 75 percent of the world´s population.

Owing to the dearth of new thinking at the last UN Special Session on drugs in 1998, many countries have taken matters into their own hands.  For example, Switzerland supports maintenance and heroin assisted therapy in order to reduce harms to users. Portugal decriminalized the use of all drugs in 2001, with significant crime prevention already 23 states plus Washington, D.C. have legalized marijuana for medicinal purposes; and four states plus Washington, D.C. have legalized marijuana for recreational purposes.  In addition, there is now unprecedented debate among elected officials, including President Obama, about how to transform drug policies to reduce mass incarcerations in the U.S.

The Global Commission hopes that UNGASS 2016 will recognize the international momentum toward adopting drug policies based on science, compassion, public health, and human rights. “The only way to put governments back in control, disempower organized crime, reduce violence and corruption is to regulate drugs according to the harm they cause,” says today’s public statement. “There is still time to get the UNGASS process back on track.”

Founded in 2011, the Global Commission on Drug Policy is composed of 25 political leaders and intellectuals from around the world including: former Secretary General of the UN Kofi Annan; former Secretary of State George Shultz; entrepreneur Richard Branson; former Chairman of the U.S. Federal Reserve Paul Volcker; and the former Presidents of: Brazil, Mexico Colombia, Chile, Portugal, Switzerland, Nigeria, Greece and Poland; as well as leaders from the UK, Pakistan, India, Spain, Canada, Norway, Peru and the Czech Republic.

The Global Commission made worldwide news when it came out in support of decriminalization in 2011. In 2014, it released a ground-breaking report that highlighted five pathways to effective drug policies, including: ensuring equitable access to controlled medicines; ending the criminalization of people who use or possess drugs; and promoting alternatives to incarceration for low-level participants in illicit drug markets. In all, the Global Commission has produced five major reports and three documentary films.